Check out the behind-the-scenes photos to see what happened when LSIC Videographer Taylor Hall and Digital Communications Director Ananda Leeke interviewed alumni, clients, staff, and students for the LSIC Video Project in March and April. Go here to watch the first video created from the project: http://bit.ly/24vKhcn or below. 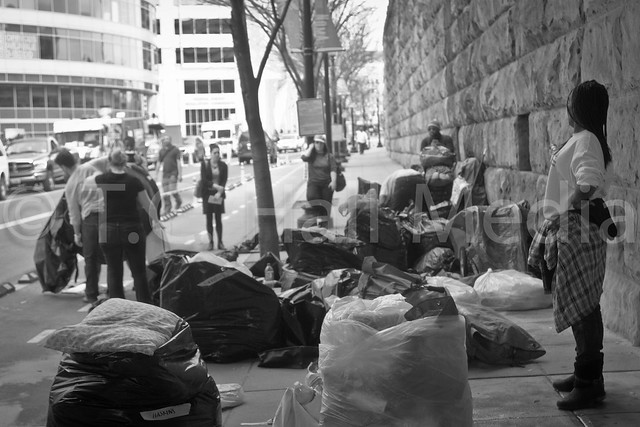 March 10th, 2016 – WASHINGTON, DC – “More than a dozen people who had sought refuge next to Union Station were evicted from their encampment under the H Street overpass on Thursday morning. The effort was coordinated by the office of Deputy Mayor of Health and Human Services (DMHHS) Brenda Donald on behalf of Mayor Muriel Bowser.

Cleanup efforts began promptly at 10 a.m., but city and nonprofit outreach workers arrived hours earlier to connect camp residents with various homeless services. They worked tirelessly to help prepare campers for the move by cleaning, packing and labeling their belongings.

The number of residents and tents at the Union Station camp fluctuated over the past few months, with as many as 19 counted in February. At the time of Thursday’s cleanup, there were approximately 14 tents and 12 residents, according to Michael Czin, Communications Director for Mayor Bowser’s office.**”

“The destruction of people’s lives as city employees rushed to erase and “disappear” these people for Muriel Bowser’s so called safer and stronger DC. Lack of a decent living wage, the destruction of housing for working class people, the closing of shelters, doubling and tripling of rents and more are just some of the many tactics that are being used to push Black, Brown and Indigenous peoples out of Washington.***”

(Washington, DC) – July 17th, 2014 – CODEPINK, American-Arab Anti-Discrimination Committee and other activists counter protested the Pro-Israeli rally at Farragut Square. There were about 600 pro-Israeli’s at this event that was sponsored by Jewish Community Relations Council of Greater Washington and 50 other Jewish organizations. Tensions escalated when a Pro-Israeli protest attacked two Pro-Palestinian women. In a quote from one of the victims of the attack she stated on her website that the Pro-Israeli protestor “hit her so hard that her bracelet was ripped off of her wrist.”

You can read the article here: http://amaniandthecapitol.com/2014/07/i-was-physically-assaulted-at-a-pro-israel-rally-in-dc-and-the-cops-did-nothing/

(Washington DC) April 18th, 2014 between 6 and 7 pm “Cop block” was taking photos of the “SkyCop Major Mobile Surveillance Unit (MSU)” on 16th and W St. in the Southeast section of DC. We proceeded to drive off when 10 undercover cops blocked us in and accused the driver of having an open can of beer in the car.

We asked if we were being detained and if so what for. The under covers reply was we have dark clothes on and this is a “high crime” area. There was a confrontation between a cop and a cop blocker about her recording the incident. As well as the cops trying to say that the driver didn’t have a valid license and that the I.D. didn’t match the car. Which implies that the car was “stolen.”

Not to mention the crazy statements such as “why don’t you record the bad guys up the street killing people” and “you’re wasting our time.” Lets remember that they detained us, it wasn’t the other way around. So on that note we plan to continue watching the watchers.

Cop Block is a decentralized project supported by a diverse group of individuals united by their shared goal of police accountability.

They highlight the double standard that some grant to those with badges by pointing to and supporting those harmed. By documenting police actions whether they are illegal, immoral or just a waste of time and resources then putting direct pressure on the individuals responsible (ideally while recording and then later sharing), we can work together to bring about transparency and have a real impact.

CopBlock.org is a resource for the education of individual rights through the dissemination of different viewpoints and tactics that seek to curtail the all-too-common rights-violations and unaccountability that today exists.

They do not “hate cops.” We believe that no one – not even those with badges – has extra rights. The failure to realize and act on that is to our detriment. By focusing the disinfecting light of transparency on public officials we safeguard not just our rights but those of future generations.

Those of us who write for and are responsible for CopBlock.org affirm that violence is not condoned except in the defense of self or others – while we recognize the rights of other individuals to use the CopBlock name, we do not recognize those that do not affirm and live by that statement.

About 100 activists and 50 trainers gathered in central Arizona’s high-desert for the 2014 actions training camp.

As well as learning “hard” direct action skills, an incredibly diverse group of people from all over the United States worked together to promote collective liberation from oppression in creating and developing relationships and through workshops and activities.

The camp was situated in an oasis where the Aqua Fria aquifer flows close to the Earth’s surface. For five days, people dove deep into the theories, philosophies, and practical uses of nonviolent direct action with an opportunity to focus on one of six skill areas: direct action climbing, arts in action, blockades, boat driving for activists, air division, or research.

The skills being shared and the bonds being built here at camp will undoubtedly fuel the environmental and social justice movements for years to come.

The evening speaker series featured an amazing lineup that included Shannon Rivers, a representative of the Akimel O’odham people (on who’s ancestral lands the camp was held), Marie Gladue (Diné) facilitated a decolonizing training, Eloise Brown (Diné) spoke on organizing with her Navajo community to successfully stop the Desert Rock Power Plant, and we also heard from Greenpeace board chair, Karen Topakian, on global campaigns.

Pittsburgh, Pennsylvania native Shenae Harrison, is an entrepreneur currently in CCAC (Community College of Allegheny County) majoring in Nursing. Ms. Harrison, chose the medical profession because she always wanted to help people. As well as being in College for Nursing she’s currently working on a clothing line as well. Shenae has Achoromia (Albinism) which is the absence of normal pigmentation especially in the skin or in red blood cells that affect the human bodies optical system. As well as other things. Ms. Harrison is inspired by the challenges of albinism. She stated “I’m albino so people like me are always told we can’t do something because we can’t see very well.” She wants to show society that even the “blind” can still see and help others.

Kendrick Johnson was a 17-year-old student at Lowndes County High School in Valdosta, Georgia, where he was last seen in his fourth-period class on the afternoon of Thursday, January 10, 2013.  After that, he never showed up to any of his other classes.

And he wasn’t on the school bus home, as he always was at the end of the day.

Worried like any parents would be, Kenneth and Jackie Johnson reported him missing to the Lowndes County Sheriff’s Department.   Both in their mid-forties, Kenneth is a truck driver and Jackie, a school bus driver.  They spent a long night wondering if their child would come home safely.

Lowndes County High School is a complex of low lying buildings, built in a horseshoe shape around a large parking lot.  The old school gym is a small building, sandwiched between two larger ones.  There are surveillance cameras outside and inside the gym, where a student visited early the next morning following Kendrick’s disappearance.

Wrestling mats were rolled up and standing vertically, as they usually were, in the back of the gym.  Horsing around, the student noticed that one mat was different from the others.  Someone’s bare feet were sticking out of the top of one of the mats.  Was this some sort of practical joke?  But it wasn’t Halloween, so what was going on?

The student quickly left and called a teacher.  When adults came to the gym and unrolled the mat, inside was the body of a male African American.  It was impossible to identify him by sight; his face had been beaten beyond recognition.  Paramedics were summoned.

The Lowndes County Sheriff’s Department arrived after, though the exact time which they showed up is unclear. Searching the body, police found a wallet in the pocket of his gym shorts.  Opening it, the identification said, “Kendrick Johnson.”  Inexplicably, County Coroner Bill Watson was not summoned until 3:45 PM, approximately five hours and forty five minutes later.

When Watson got there, it was chaos. The entire scene around the body was trampled by everyone from curious coaches and teachers, to the cops themselves.  To say the crime scene was contaminated is putting it mildly.  Little evidence was gathered; no one was questioned; and no crime scene photos were taken.  The body was eventually carted off to the Harrington Funeral Home, where an interested worker did snap the only photo extant of Kendrick’s face in death.

Idle No More is an ongoing protest movement originating among the Aboriginal peoples in Canada comprising the First Nations, Metis and Inuit peoples and their non-Aboriginal supporters in Canada, and to a lesser extent, internationally. It has consisted of a number of political actions worldwide, inspired in part by the hunger strike of Attawapiskat Chief Theresa Spence[1] and further coordinated via social media. A reaction to alleged abuses of indigenous treaty rights by the current federal government, the movement takes particular issue with the recent omnibus bill Bill C-45.

Guantanamo harms our nation every day it stays open, and it continues to serve as a potent symbol for terrorist recruitment. As President Obama explained in a speech in early 2009, instead of serving as a tool to counter terrorism, Guantanamo became a symbol that helped al-Qaeda recruit terrorists to its cause. Indeed, the existence of Guantanamo likely created more terrorists around the world than it ever detained.” That remains true today.

Family farmers and farm organizations originally filed a lawsuit against Monsanto in March 2011 in an effort to invalidate Monsanto’s patents and protect organic and non-GMO family farmers from unwanted genetic contamination of their crops and from Monsanto’s aggressive patent infringement lawsuits.  Monsanto filed a motion to dismiss the case, which was heard in Federal District Court in New York City on January 31st, 2012. In February 2012, Federal Judge Naomi Buchwald dismissed the case, ruling that the farmers lacked legal standing regarding the concerns over genetic contamination and resulting economic harm.  In March 2012, Plaintiffs appealed the District Court’s decision to the Court of Appeals for the Federal Circuit, which scheduled oral argument in the case to be heard on January 10, 2013.  Lawyers from the Public Patent Foundation, who are representing the farmers have identified numerous reversible legal and factual errors committed by the judge which they assert caused her to mistakenly dismiss the case.  What’s at Stake  OSGATA vs Monsanto is a landmark legal case attempting to protect family farmers from Monsanto’s aggressive patent infringement lawsuits and unwanted genetic contamination that results when Monsanto’s patented, GMO pollen blowing across farmer’s fences and contaminates their crops against their wishes. In an effort to enforce their legal patents on their genetically engineered genes, Monsanto regularly sends their seed police out in rural America to trespass on farmer’s fields and steal their plants to take them back to their labs for testing.  Since 1997, one year after the approval of Monsanto’s GMO Roundup Ready soybeans, the world’s leading chemical and biotech seed company admits to filing 150 lawsuits against America’s family farmers, while settling another 700 out of court for undisclosed amounts. During this time, Monsanto has investigated an average of more than 500 family farmers each year.  Due to these aggressive lawsuits and investigations, Monsanto has created an atmosphere of fear in rural America and driven dozens of farmers into bankruptcy.  #J10 #StopMonsanto  For more info on the case, check out:  www.fooddemocracynow.org